Union Metro Station is one of the busiest stations on the Dubai Metro. It is a transfer station and serves both the Red Line and the Green Line.

The station is located on Union Square in the Deira area of the city, just a short walk from the Dubai Creek. Places of interest nearby include Al Ghurair Centre and Twin Towers.

See our interactive map of the wonderful Dubai Metro

There is a huge choice of budget hotels in the area offering cheap rooms for rent (see list at the end of this page).

Union Square Bus Station is just west of the station. Intercity services departing from here include buses to Sharjah, Ajman, and Fujairah. The seasonal bus service to Global Village also runs from here.

The station is in Zone 5 (view a map of the Dubai Metro). Fares depend on how many zones you pass through when going from your origin station to your destination.

Operating hours for Dubai Metro stations can be found here. Note that these are timings for the Dubai Metro as a whole. Timings for first and last train services from Union Metro Station may be different.

Adjacent stations on the Red Line are BurJuman and Al Rigga. Those on the Green Line are Salah Al Din and Baniyas Square.

Cinemas near Union Metro Station include:

Places to shop near Union Metro Station include:

Hotels near Union Metro Station include: 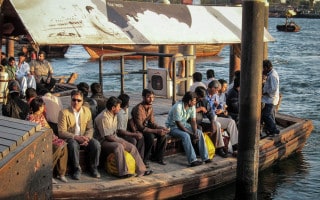 Deira is the oldest part of Dubai. It lies of the eastern side of the Creek and stretches down from its mouth to Garhoud and Dubai Festival City. Shopping mall in Deira. Stores include Carrefour, and Centrepoint.

Movie listings and times for Novo Cinemas at the Al Ghurair Centre in Deira.